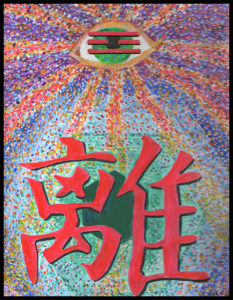 Lay the fire with a bed of tinder.  It is that which fire is not without. Ah, the tinder! It is in the middle of the chosen place. It is the thread and the weave, the open middle, the yin aspect. The associations with the spinner are feminine. Consider the spinster: an unmarried woman; or the spinning house: a prison for prostitutes which is a house of corrections for impassioned women. To weave is to spin images. It is the beginning of the burning. Spinning or making tinder is to draw out and twist fibers into thread. This is in preparation, to make it ready to transform and to receive the spark.

I learned to make a fire from a bow drill, which is as close to rubbing two sticks together as it gets. The interesting thing about making a fire in the wilderness, in a survival situation, is the steps and considerations before there is to be fire. Fire does not come or begin or maintain or grow on its own. It requires fuel and the proper environment.

In making a fire, before we learn how to make the tools, we are taught to consider the placement of the fire. You want your fire to heat and to last without burning fuel excessively. Fires are placed in hallows or on stones with consideration of the win 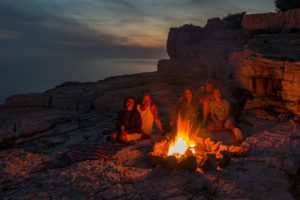 d and elements that are either moist or combustible. A blazing fire is too hot for cooking and burns too much fuel. A fire built on roots can cause underground fires. A fire built with too much exposure will blow out. A fire too far from the hut will not keep you warm in the night, or fire too close will sweat you out or smoke you out. Its good to have a barrier to the heat, something to keep it in, or bouncing back. 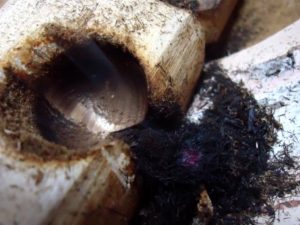 In preparation you build a kind of hut or tipi for the flame. This is placed on the spot you have carefully picked out with careful consideration. There are four types of grades of fuel: tinder (very fine wood and bark fibers), kindling (Twigs and slivers of wood), squaw wood (pencil to wrist thick sticks), and firewood (logs and branches). There are many things to consider in gathering the fuel: the types of trees and the hardness of the wood, the location near water, the amount of moisture, gathering dead limbs from trees rather than ground wood, etc. Moisture in wood can be good for some uses of fire. However the tinder, that which catches the spark, must be as dry as possible.

The tipi is built around the tinder, leaving an opening to the wind. Balance and lean the skinniest and sm

allest kindling first to protect it and ready to catch the first flames. Place the kindling around it, getting larger and thicker, to about 6-8 inches wide and a foot high. This technique will aid in flourishing any fire.

The bow drill is 5 parts. Each element is chosen withcare and molded with precision. The bow is the cordage tied to the spindle. The handhold is between your hand and the spindle. It holds the drill in place and is made of rock, bone, or very hard wood. The fireboard is a flat piece, twice as long as the drill and half as thick. It is notched and made from the same medium hard, dry wood as the drill.  The drill is a rounded wood 8’ spindle with points at both ends. The tinder is a light fluff ball of dry fiber 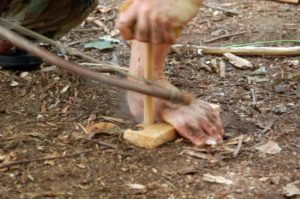 By holding the apparatus in the correct form and movement a rhythm continues with strong intentions and focus.  There is a warming friction from the thrusting and stroking of the combination of the tools. Things begin to heat up. Patience, timing, good form, and coordinated movement all play significant roles. Equally as important, even vital to the process, are the mental and emotional qualities. It is desire fueled with belief.

My teacher taught us all the steps. When it came to the portion where he demonstrated the making of fire from wood, he asked us for our help. He wanted that we believe in him and his ability to make it happen. He asked us to focus with faith and the image of the fire, but also with patience in the process. We were not to wander or lose interest in the creation of the spark. In attitude we were rooting him on with delighted anticipation of fire. The success is enjoyed by all.

I constructed my own bow drill and tipi with tinder. I held within me the positive desire and faith. I copied the stance and the movement. I practiced the task with attention to smooth movement: stroking, desiring, believing, doing, and continuing. It is mindful, physical, and emotional. It is praying to the gods and also releasing all thought. As the heat and the smoke becomes a red spark it is all consuming. It is orgasmic. 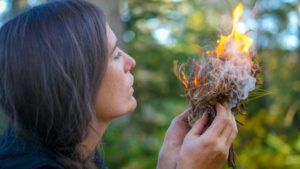 I feed the spark to the tinder, where they combine into flame. I blow them together and cradle the glow. Fire in my hands is transferred to the opening of the tipi. It catches. I am in elation, breathless, gasping, in wonder and awe. I am also spent from the exertion, my muscles screaming in the release. A warm glow fills my face. The fire is clinging to the structure and moved by the wind and radiates light and warmth. I sit back and smile. Satisfaction, fulfillment, reward are kindled by the flames. 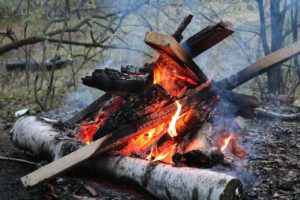 How does the trigram describe a situation? …a cause (origin, root)? …a person? How does it tell you what to do?  What does it tell about how to do something?

“I can’t say it is wrong (to see fire as a net or that which connects, sifts and separates). The name of the trigram, li 離, means ‘leave, separate, part’. At the same time, because of its connection to Fire, it means ‘to connect, cling’. This gives this trigram a somewhat Buddhist flavor – when you cling to something you will sooner or later have to let go of it, like when Fire burns it fuel it will sooner or later be disconnected to it. Yet when it comes to the meaning of the trigram it is the ‘connect’ part that is emphasized, not the ‘separate’ part.” –Harmen

A situation with the attributes of fire would be characterized by clinging, consuming, visualizing, and clarity. It is easy to imagine a nighttime camp fire that clings to and consumes the elements of wood and air to bring light and warmth. People are drawn to the warmth and to the light as t 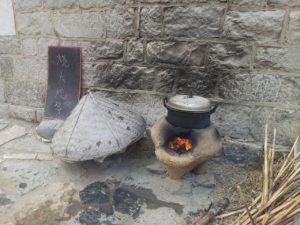 hey naturally gather for these properties. I think of the phrase ‘keep the home fires burning.’ The hearth was central to the home. It heats and is the place for cooking. It is a light that allows
discernment in the darkness. The hearth of the home is associated with cherishing and adhering to the family and the home. It is also a situation where we are using gut feelings, an internal process, to make decisions by what resonates with the fire within.

I also see it as a net. We are connected by it and separated by it at the same time. It catches what is useful and sifts out what is not. It is an internal process by which we decide what resonates in the gut and what does not. That which does not make it in the net is not gone, just not needed in the moment. There can be struggle to keep the spark alive. When surrounded by the structures and rules of the collective, blow on the little spark, feed it some tinder, and keep it alive.

Too much fire, out of control, and congregating together, relying on others, and all is lost, consumed. Gone. The fire of hell is to lose the essence of the soulfulness. Whatever is thrown into it becomes something altogether different, ashes to ashes and dust to dust. That which society does not want to allow into the collective is burned away.

In a more out of balance sense, fire could represent a situation hot or volatile, with burning passions. In other words, it is a situation in need of cooling off.  When peopl 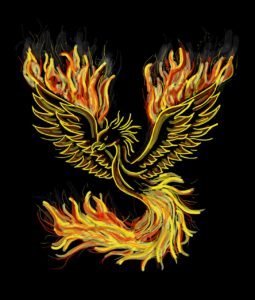 e come together around a fire, there is harmony as well as disagreement. It could be a situation characterized by a lack of independence in the sense of neediness and co-dependency. There is something of change in the sense of burning away impurities and complete transformation, a rendering by extreme heat, like the phoenix that rises from the ashes.

The cause or root can be whatever a person clings to as they move through life and specific situations. It could be love, creativity, the home, a career, a religion, or a cause. The fire as cause is to consider the roots of dependence, clinging. The attending to a fire or lack of attending to it could be a root cause. The fire must consume fuel to stay burning. It needs the proper environment. A spark can easily be buried or it can be the beginning of a forest fire. Discernment can lead to positive causes. It can also be blinding, if what is seen or considered is only by the light of the fire. It is not always the bigger picture. 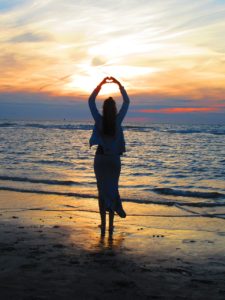 as being passionate about something. It is also a person characterized by a light of discernment and warmth. The thing that they cling to or depend on can be different sources of fuel. It might be a passion for love, for an ideal, or for art. It might also be people who have exhibited transformative effects in their lives, who were made different by the fire. It could also be a person dependent on others.

Consider what or who to depend on. Cling to the fuel that keeps the fire burning. Visualize. Imagine. Use discernment. Make use of passion. Use a spark. Blow the flames. Consider the grades of fuel and how they affect he fire. Tend the fire. Light the way. Get clarity. Bring in a sense of warmth. Adhere to something. Cherish. Feel it in the gut. Consume the fuel needed.

Passionately. With desire. With clinging dependence. Discerningly. With clarity of vision. With belief in possibility. Use visualizing images. Transformatively. With dedication and devotion. With fervor and affection. Do it by watching the fire and how it adjusts to the fuel provided. Look at how to connect with the available fuel to keep the flame steady and burning.