It is a tyrannical take over. I bend to its demands. I write one scene over and over. ‘She falls in an abandoned well. It is a dark pit. There is no way out.’ The face of Jack Nicholson looms as my sacrificial archetype of the tortured writer.

Depression and his evil buddies dread and self-loathing breathe down my neck. The thought of quitting brings no more relief than the thought of continuing. The ugly monster of self-doubt bullies me while reveling in every hesitation. And that’s before the first cup of coffee.

After I described the depths of chaos and despair, using metaphors of snakes and dungeon walls, to my therapist, she said that I was in a dark place. That struck me, even though she was stating the obvious.  So I determined to do something about it. I decided to learn the way to connect with the muse. In so doing, I would thereby take control of the house from the tyranny of the inner critic.

I made it my purpose to allow the way I was writing to be the past. I put it aside – with no decisions made. I made it my intention to nourish myself with information on writing, activating the right brain, and discovering the muse. I found courses and podcasts on creative writing, especially focused on getting over blocks and discovering creative flow.

One of the exercises suggested a timed writing session for 10-30 minutes. The idea is to write the question: ‘Where do you want to go Writing?’ and then to answer it in first person, as if the writing is answering. From there, I continue to ask questions and see where it goes. This turned out to be an amazing exercise for me.

I had many questions – all about my fears and doubts and concerns. Though I am accustomed to questioning through the I Ching – this was different. A voice emerged within me that is kind and wise. Now, of course, I know that the voice is a part of me, but it has not been getting much air time. The tyrant voice was hogging the microphone.

I asked the Yi:

“Path of letting the muse out to play silencing the inner critic: images that integrate my learning today.“

I enjoy watching the lines emerge and feeling the yin or the yang at each place. I allow it to move me along the way. There is responsive yin at the place of intentions. I am open. Yang moves at the place of expression. It looks like writer´s block. By line three, I see the trigram: water on the inside. I am dealing with emotions and challenges.  A yang line at four, and I think of strong assistance meeting the outer world. There is help, and I am determined to receive it. Open yin in the fifth place gives me a sense of responsive leadership. The trigram thunder appears. I feel the shock and movement outside.  I am shaking things up and fertilizing growth.

I sit with the idea of the trigrams, water below and thunder above, and allow my mind to form images. A thunder storm over a rushing river is movement and flow. I imagine myself standing over a gushing stream as it falls off a cliff into a pit below while the thunder crashes and rain pours down. It feels exciting, dangerous. I could be pulled into the flow myself – knocked off balance by the elements and taken away. Yes! This is release. 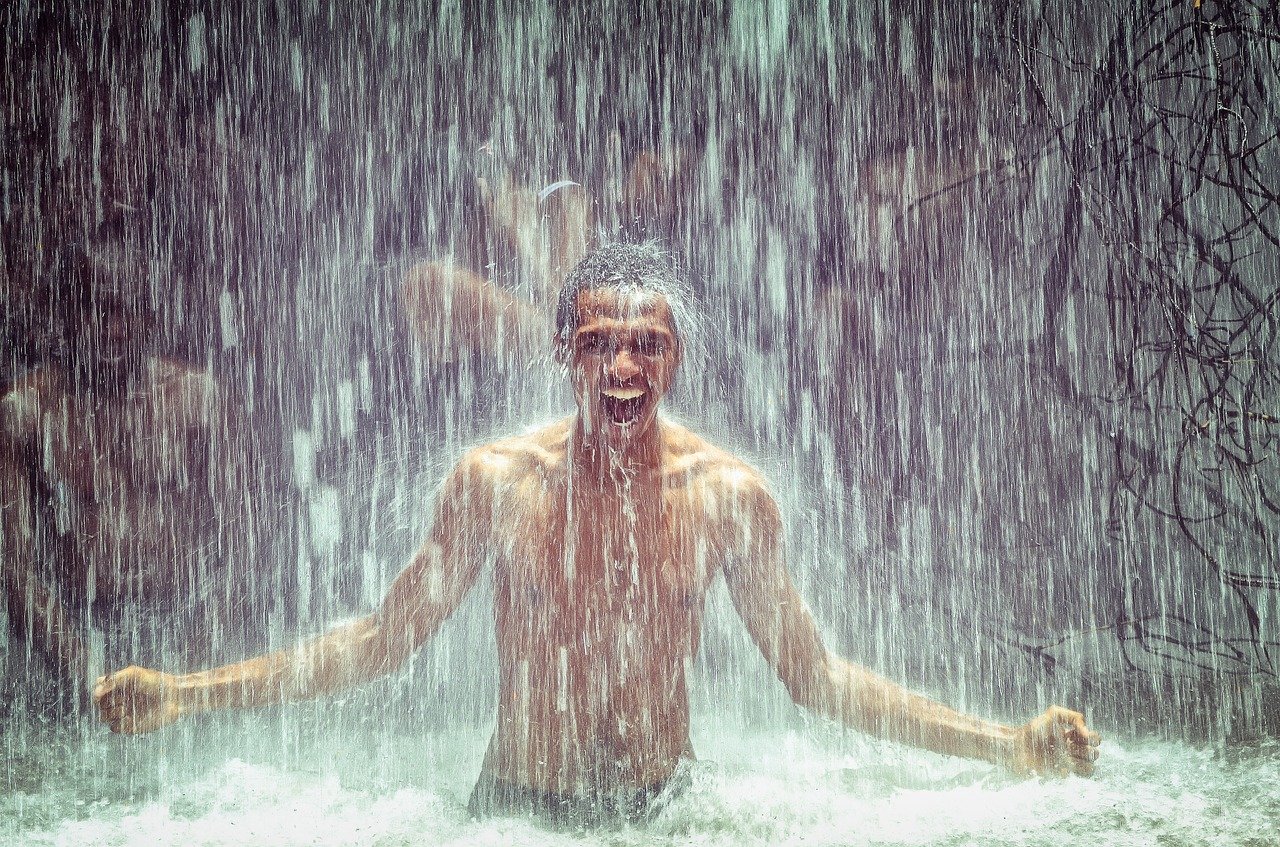 Line 2 is a yang line moving. Line 2 is the place of expression – getting ideas out, trying things, running it through. When I look at the lines, I think of the dragon that emerges through hexagram 1. I see what the dragon is experiencing in each place. In line 2 he has come up from the depths and is checking out the field, communicating with someone – the great and kind voice – and speaking ideas that may later become manifest.

The imbalance at line 2 is yang with too much yin, so movement is taking place. I often see moving lines as excited molecules doing a dance, calling for some attention, or some action, or some shift in focus.  This place of doubt, about continuing this writing project, has brought me face to face with a lifetime of an overbearing inner critic. A yang line at two is not centered and correct and it is out of balance. That is how I have felt about expressing creatively. The force of the river’s flow has been encumbered. Using the attributes of the trigram of change, earth, gives me an idea of how to balance things.  Acceptance and nurturing is the opposite of the harsh critic. The idea of: ‘do without doing’ reminds me of the process of automatic writing where I found the kind voice emerging.

I looked up the meaning and etymology of ‘release’ just for more imagery. Inherent in the meaning is the idea that that there was previously a block: the imprisonment, the bounding. Most of the synonyms have the prefix ‘un,’ as in: unloose, unbind, unchain, unleash, unfetter, unshackle. Release is the very moment of movement to freedom and flow. It is an exciting place. Another definition says: ‘the action of making a movie, recording, or other product available for general viewing or purchase. “The film was withheld for two years before its release.” It speaks volumes to my situation of moving through writer’s block in creating a screenplay. I experience it as prophetically direct.

In the nuclear trigrams: below fire is enveloped by water. My passion and clarity about the project is getting drowned. My inner fire is sputtering in the dampness. The water on the outside is dominating with negative emotions of insecurity. On the outside, water is enveloped by earth. Water flows and takes the plunge through the emotional depths. Its nature is to do this but it is being enveloped, hindered. I have accepted the emotional turmoil of writing as part of the process, but I was surely feeling stopped in the flow. Earth, as the enveloper, is too passive and without guidance. Earth receives seeds to produce tangible results. There is a stifling of the creative flow when tangibility is paramount. I need the freedom to explore ideas without judgement of their usability.

At this point in the reading, I already have images that speak to me and the question is answered. Often, I would stop here in the reading and not even bother to look at the judgement and line text. But since I asked for images, I continue:

It feels like quite a lot of coming and going. Since I already have meaning for the reading, I am just fitting in the text with what I have learned. No matter what it says, it cannot negate the imagery that has already come forth. There is no wrong way to experience it. The first line tells me that there is, decidedly, a direction that is fruitful. If I am getting nothing going one way, then it is time to come back to center, flow. Once I am centered, then it pays to go with haste in the direction that is helpful. This says to me that when I am experiencing the block, which is not flow, then I come back to the exercises that activate the right brain, and I hear the kind voice. The flow happens quickly, and that’s a good thing.

九二：田获三狐，得黄矢，贞吉。
Nine in the second place means:
One kills three foxes in the field
And receives a yellow arrow.
Perseverance brings good fortune.

Oh, I like this one because of the concrete imagery.  Now that’s a good eye of discernment, skill, and maybe some luck thrown in – to get all three foxes. Foxes are clever and quick and not easy to hunt. My screenplay is set in the in the ancient world. The main character learns to hunt and to shoot a bow and arrow expertly from horseback. So it is an image close to my heart. To receive a golden arrow is the reward – one above and beyond obtaining the hunt. That is a good direction indeed.

I feel in especially good spirits after pondering this imagery. Though, I cannot say that the tyrant voice has disappeared. In fact, it still takes over, especially when I am I am tired and vulnerable. But I am recognizing it better by being able to contrast it to the kind voice. The inner critic is revealed as a bully, with its dark, unhelpful suggestions. Recognizing it helps me to ignore it or switch the channel. I am excited to continue my new daily writing practice of asking questions and giving the kind voice more air time. I will persevere in hastening this direction of playful flow.

This site uses Akismet to reduce spam. Learn how your comment data is processed.