Assignment: How does the trigram describe a situation; a cause (origin, root); a person?  Ho 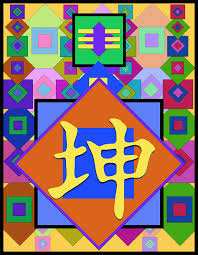 “Earth Is. It is Grand. It carries everything. Provides for everything if she is given the right material. She nourishes. She is the Mother. She says ‘come to me and I will make you grow’. She does not do that out of power (that would be Heaven), she does that simply because she does it. She is the ultimate expression of weiwuwei 為無為, ‘doing by not doing’. That is why she cannot strictly be called ‘life giving’, although I think I know what you mean. Just by herself she can’t create life, just as Heaven is can’t creative life on its own. It provides the material through which the forces can act. Without substance forces cannot exercise their influence. Earth does have a choice: how and where the forces are accepted is entirely up to her.”  Harmen Mesker

The situation that resonates most deeply with me is working with the Yi. The more I can open myself to these qualities when consulting, the more growth and yield is possible. I am the material through which the forces act. I am the substance upon which the forces exercise their influence. I labor and serve in the shadows of my consciousness to be the fertile place of responsiveness, deliverance, and inner release. In this process of yielding in willing sub-mission to the message, I find abatement of stress that is inward. I open, without resistance, to the message.

I have been in therapy for 25 years, on and off. I have come to trust my therapist, as she is also a mentor. I can see that the therapeutic process has been a cause for growth in my life. It doesn’t start out that way, necessarily, but the goal of therapy is to bring about or cause changes inwardly. It works best when trust has been developed, and I can be like the attributes of earth. Then, the process itself becomes like earth in the way it causes me to willing submit to it, because of the trust I have in the process. The therapeutic process is the earth that has caused growth in me. There is everything about Earthiness in that office, my therapist, the process, and me.

In a more negative sense the yielding can lead to being overly influenced and responsive if the forces themselves are negative. Allowing bad seeds to be planted in your garden can cause a sickly garden.

I know that usually a motherly type person is represented by Earth. However, I think of my late husband, Allen. He was the kindest person I have ever known. He had a way of allowing others their beliefs and he was receptive to them. He 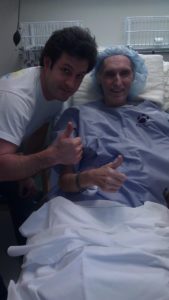 was born Jewish and then Messianic Jewish, and then a Born Again Christian Preacher, and then a New Age book author and teacher of Tai Chi. He was open to other people in a way that I had never before experienced. When he was so sick in the hospital, people would come to preach or pray with him. These people always thought Allen was a member of their religion. He was so open and receptive to people. He would allow them to influence him with their words and beliefs and words, and there would be growth and inner release for all who experienced it. I saw him ask Janitors or orderlies in the hospital to come and pray with him. Some guy who had been pushing a broom would come to his side and belt out the most amazing prayer, and Allen would receive it in the most giving and personal way. He was also full of the attributes of Earth in the way he received his children. He allowed them to be themselves and he was receptive to them. He was the most motherly of fathers.

Open. Be receptive. Be willing to labor and serve. Be flexible. Allow inner release. Be open to abatement of distress and to deliverance. Grow. Yield. Make use of willingness. Release resistance. Provide for. Allow for growth. Nourish. Just be.