I am a f*cking flying dragon in the sky. Yo.

I told the story of being gang raped at the age of 17 when I first began this assignment. I wrote of the survival instinct that emerged to conquer the powerlessness and transcend being outcast. The journey took me to Japan to work for the Yakuza in the sex trade industry. Innocence lost was replaced by achievement and suc

cess in the seedy underworld. I jus
t kept moving, doing, getting farther from home and burning through the environment. Although the ideas of sexual trauma and response may seem to belong to yin and earth, something quite the opposite moved in me. I sense something ancestral in heaven: it is doing what has to be done and also what has been done by our forebearers throughout time. We are taught it and we also know it. My sisters before me forged a similar trail as courtesans and madams: the Mary Magdalenes. 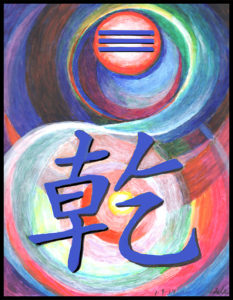 I became the essence of the prostitute because of this inner heritage of knowing what to do. Certainly I was not literally taught this in my small town high school. The shock and trauma of the event unleashed an age old instinct, an internal navigation, a powerful urge. The early stages of this odyssey were creative and unique and marked by action and guts; but the motivations were not from a source of pure heaven. Things were askew, unbalanced and driven by unconscious pain. Even so, I do not think it was a wrong example, so much as one overly clouded in negative association.

Heaven has been the most challenging energy for me to get a handle on in its natural, positive essence. This would seem contradictory, given the name. All those yang lines gave me the feeling of heaviness, oppressiveness, piled one atop another, and no way out. I struggled with the images of Hexagram 44, the temptress, the one never to marry. I have had to separate my emotions and life-long associations to embrace the purity of the creative force. I had to quit seeing it as something done to me, or something for me to avoid or to emulate. I had to become the dragon, instead of simply riding it.

I began to se

e the process of writing blog posts about trigrams as the example most compelling and current to help me positively embrace the creative force of the attributes of heaven. It has been a meta experience akin to magnifying the magnified. I am endeavoring to write about the creative force that is behind writing about heaven, which is the creative force. I also did a reading about it. I have been in a state of keen awareness of the feeling that I am about to write it, knowing it, just before actually doing it.

There is a confidence, a trust, in me that has come from all the writing I have done before, including about all the other trigrams. I have know-how. I have studied and lived it, and I feel confidence in my creative ingenuity. I can feel the timing. Life demands and work duties have been part of the timing, but there is also the movement of the dragon within me from murky ideas, to expression, to toiling through without concern if it is right or wrong or what others may think. My experience is emerging and I cannot but tell it. This is the best feeling ever. I noticed it with such highlight and contrast that I almost wanted to stay there. It was that place, before the ideas have come together, of knowing, trusting, and feeling that the timing will be perfect and the words will come, and the piece will reach completion. 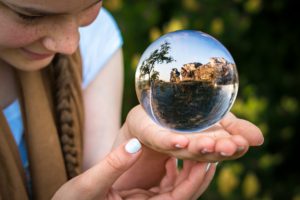 The other night, I woke from sleep with a start thinking that I had lost the ability to write it. I sat up. I feared for a moment that I had waited too long to begin, milking the feeling of knowing it would come. It is time to do. It is time to sit and organize all the parts and write the ideas. It is time for action. It’s not about what I have done in the past, but what I am experiencing now. It is the toil of working through the stages of the creative process. Live it now and move with it. My Tai Chi teacher, Jude, tells each student to see and feel their own movements as the best Tai Chi. It is the best for you in this moment. I know this now, as I write, that this is the best ever. This is heaven.

“It isn’t that Heaven doesn’t want to think about consequences. Heaven moves forward, it is continuous action and it can only be stopped by something else. It is like a beam of light that travels the universe.”  – Harmen 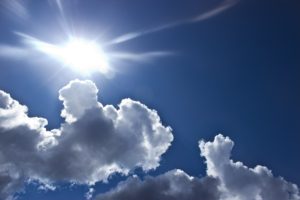 It is characterized by action and determination. It is to keep doing. With Heaven the consequences are calculated and known, carefully rationalized and pros and cons weighted. The lines can feels thick, heavy, pressing. There is no breaking through it, no denying it or getting around it. It is a foundation. It feels impenetrable, unbreakable.

In the light of yang there is color and the sunrise, which is beautiful and primal. There are many questions and answers and learning. It is science and religion and it answers many questions. But it also turns it into sold beliefs that cannot be penetrated. It can lead to feeling closed in, over ruled, dominated, and not allowing for other interpretations. There is security and protection in it, like a house, a father, a husband, a teacher, a leader.

It is continuous, a pure energy that is lasting. It generates and re-generates. It transcends every situation. It is origin with no beginning or ending. It directs in perfect timing. It is an urge without need from other sources. It cannot be depleted.

It is knowing what must be done and when to do it. In that way it is survival: finding food and water, navigating, and hunting. It learns and teaches. Our ancestors taught us. It is breath. It is know-how that comes from ancestry and ingenuity. It meets the demand. It takes the creative and unique opportunity to advantage. It is punctuality and expert timing in readiness. It is a knowing season. There is determination, force, and achievement. It is passed down. There is faith, trust, skill and intelligence. It is implicit presence. It is a wavelength.

The force and energy of heaven causes things to flourish and grow and be built, created, and recognized. It can make beauty and art and buildings and religions.

It is a person determined in action and characterized by purpose and will. There is confidence and strength in this person. They k 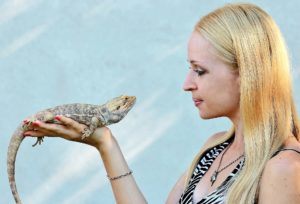 now what to do and have control and timing. It could be a bad ass, a king of the
domain. All titles and rewards belong to heaven. Other people recognize this person as a leader.

Take action. Do. Be creative. Exert your will. Lead. Use power and persistence. Go for it. Use creative solutions. Be firm.. Take control. Have confidence. Utilize strength in action. Keep going. Focus. Use skill and ability, resources, and talents. Just do it. Motivate. Deal with it. Express the urge. Move when it is time to move. Use fortitude. Do it 100%. Do it without concern as to what others think.

Forcefully. Unremittingly. Persistantly. With control and confidence. With ingenuity, determination, and inspiration. . Resourcefully.

Harmen suggested I look for positive associations for heaven (after my first submission of gang rape and prostitution). I sought to understand the dragon. Who better than Puff? With this exploration, I came to see the dragon with fresh eyes, in child-like innocence, a pal, and a creative creature. 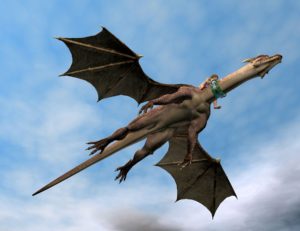 “Puff, the magic dragon lived by the sea”

Puff is an outward breath or exhalation. It is the force of the beginning of life. It is the first cry of a baby. Magic is power, influence, a force upon events. He lived by the water which is yin energy. Yin and yang live in harmony.

And frolicked in the autumn mist”

Frolicking is playful and without malice and connotes sexual activity or, metaphorically speaking, fertilization of child-like imagination. It denotes seasonal activity. Autumn is associated with the kind of transformation that represents going down, the end of summer and of childhood. The mist obscures vision. As we age, our vision of the creative imagination is often lost. It is the alchemical tears produced by moisture and air. Change is inevitable.

“in a land called Honnah Lee.

This fertile, innocent force is from a land unknown. His origins are mysterious. The friend of the dragon is diminutive in comparison and also fragile. He is made of paper. Childhood is tender and can be easily destroyed by elements. In comparison, the dragon is grand, hardy, seasonal, never-ceasing and strong. The child-like innocence adores the scale, both the size and the skin, the rascal. The dragon is not bad, but he is an outcast and misunderstood.

“And brought him strings and sealing wax”

The child makes a sacrifice, a gift, to the dragon of creative implements. He gives over the tools to the creative force. The string is from musical instruments and connotes tuning someone, perhaps to a purpose. It is also an attachment, which can also be a limitation, like a leash. There are stipulations to the creative force. Sealing wax is evidence of authenticity. It is also approval and can be likened to one’s destiny.

“and other fancy stuff, oh!”

Fancy is a liking, affection, and is also associated with a whim or desire: a productive imagination. It is conception of an image. There is a sense of the ornamental and elegance in art, that can be superficial or it can be the outward manifestation of the inner self. The child shares with the dragon his creative spirit and it is thereby made fanciful. Stuff is to furnish, fill, and reinforce. It is the protection under chain-mail. It is the filling and fulfillment of what is inside. And the ‘oh’ denotes it is all so very true, and simply amazing. Indeed. 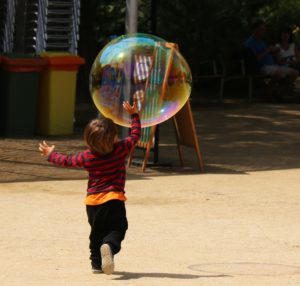